After Nina Tomažin Bolcar graduated from the Faculty of Architecture, she turned to the marketing communications. She was a creative director at Kanal A before moving to the field of public relations in 2001, when she got employed at Pro Plus – the broadcaster of POP TV and Kanal A television channels, and the 24ur.com web portal.

She got her master’s degree at the Faculty of Economics in Ljubljana in 2004. She cofounded PR Obrat within the Factory of Visions (Tovarna vizij) communication group in May 2005 and the Propiar strategic communication agency in February 2006, which she has been running from the beginning.

Nina is a habilitated lecturer for marketing communications, a mentor to entrepreneurs in the AmCham Young Professionals programs and a member of Viktor Academy, which presents awards for Slovenian media achievements. She was selected as one of the six most promising young Slovene managers among two hundred candidates, receiving a subsidized scholarship for the Executive MBA program by Cotrugli Business School in 2010.

She was elected President of the Slovenian section of the International Association of Business Communicators (IABC Slovenia) in December 2018 with the vision to set up – together with the team – a network of experts from various industries who will, in accordance with the standards and values of IABC, ensure and maintain the highest standards of communication and contribute to the development of strategic communication in Slovenia.

She was a top athlete (played in the 2nd federal Yugoslav volleyball league and was a member of the Slovenian cadet team) and is a recreational sportswoman today; she is also a member of the Public Relations Society of Slovenia (PRSS) and various other business associations. She gives substantial funds and her free time to charity, and is – among other things – a recipient of the Paul Harris Fellow recognition by the international Rotary Foundation. 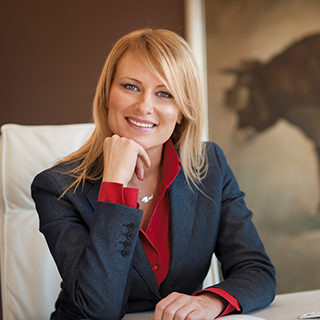 The personality of the organization are it's employees.